Here’s what Casual Game Insider has to say about RANDOMonium: 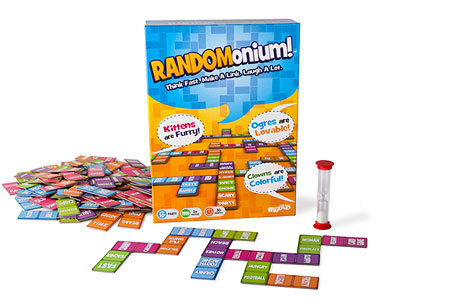 “RANDOMonium is a party game that is best described as a mix between Dominoes and word-association games like Apples to Apples. Players choose a hand of 10 double-sided tiles containing a wide variety of words and phrases, from funny adjectives to celebrities. Each player then takes turns setting the 20-second timer and placing as many tiles on the table as possible.

Tiles are placed next to existing ones so that two words are associated together. The player must state the association out loud as the tile is placed. Examples might include “toes are nasty,” “Toy Story and Dirty Dancing are movies,” or “I have chest hair.” If there are any disputes about an association that was made, they are resolved after the timer expires, and the player draws a new tile for each one that is rejected by the group. The first player to get rid of all of his tiles wins.

Even after a stressful day (or perhaps because it was a stressful day), we found this game to be very entertaining – we simply did not want to stop playing. The tiles are plentiful, the associations can be very funny, and the possibilities are almost endless. The time pressure of the game causes players to blurt out the first thing that comes to mind, which can be surprising. We had a blast debating nonsensical associations for tiles that didnít seem to fit anywhere. While the game can technically support large groups of up to 16 or more players, it seems ideal for smaller groups in order to reduce the time between turns.”

You can read more about Casual Game Insider magazine at: http://casualgamerevolution.com/magazine